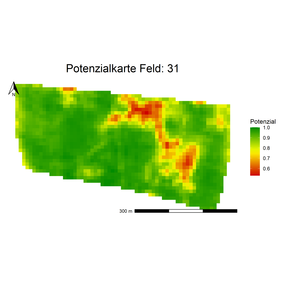 Learning for life after graduating from high school? Bjarne Weigelt did it. He spent 12 months at the ATB as part of a 'Voluntary Social Year in Science, Technology and Sustainability (FJN)' to experience science and gain inspiration for his studies. Now, at the end of August, it's over. Colleagues bid him farewell today and thanked him for his great commitment, his creative contributions and his willingness to work hard.

Bjarne Weigelt, Luca Marie Born and Mia Kopetzky are the three dedicated young people who during the last year at the ATB had the opportunity to get a taste of practical life and gain their first experience in science. Now, by the end of August, they will leave the ATB again to start their academic training. They have collaborated in research, taken samples, analyzed these in the laboratory and actively supported the scientists of the ATB - whether in the field, in the laboratory or at the desk. Thanks to our dedicated FJNers!

Bjarne Weigelt, for example, used satellite data to create yield potential maps of all the fields at the Lehr-und Versuchsanstalt für Tierhaltung around Groß Kreutz as part of the preliminary work for the planned Leibniz Innovation Farm and presented the results during a seminar at the institute. "These maps are very helpful for our further work," says ATB scientist Michael Schirrmann, who supervised Bjarne Weigelt's work. "For this, Bjarne learned a programming language and how to deal with gigantic amounts of data quite incidentally. The documentation he created on the maps and the methodology will also enable subsequent FJNer to pursue this exciting task."

Bjarne Weigelt will now study Environmental Engineering and eventually return to the ATB for an internship or in the context of a graduation thesis.
We wish him, Luca Marie Born and Mia Kopetzky a good start into the next stage of their life's journey!