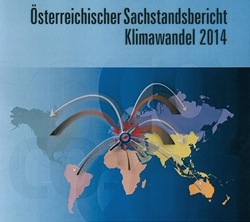 Sept 17, 2014: The Austrian Assessment Report on Climate Change (APCC) - the Austrian counterpart to the IPCC Assessment Report - was presented to public on 17 September in Vienna with great media coverage. Dr. Barbara Amon, formerly at the BOKU University in Vienna, was as invited lead author responsible for the chapter "Agriculture" in the report.

A total of 240 researchers have contributed during the last three years to the more than 1,000-page report. The report was produced under the auspices of the Austrian Panel on Climate Change (APCC) under the Austrian Climate Research Program (ACRP). To ensure independence the report was subjected to an international review process, and the summary for decision makers was jointly formulated by the authors.

Like the IPCC report, the Austrian Assessment Report on Climate Change 2014 offers to provide decision makers with the necessary fundamentals to take effective mitigation and adaptation measures to climate change. It provides no direct guidance for policy, but shows developments, indicates needs to achieve certain goals and points out options for action.

As a result, the scientists expect a further rise in temperature in Austria: In case no countermeasures are taken they expect an increase of 3.5 °C by the end of the 21st century. Especially agriculture and forestry, ecosystems, biodiversity, but also tourism and the health system are affected by the consequences of climate change. The report clearly reveales that the phenomenon of climate change can only be tackled holistically. According to the scientists, radical structural and technical conversion processes, social and technological innovation and participatory planning processes are required to meet the 2 °C target and realize the transformation to a low-carbon society.

The report is published open access and can be downloaded: http://hw.oeaw.ac.at/APPC_AAR2014.pdf

Online sale of the print version from the publisher: http://hw.oeaw.ac.at/7699-2