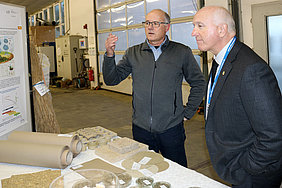 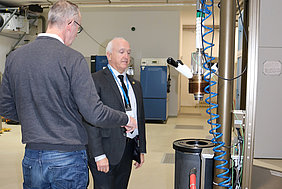 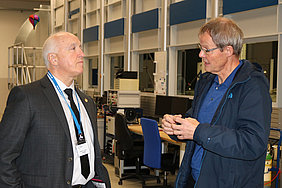 On November 21, Keith G. Tinsey, President of the American Society of Agricultural and Biological Engineers (ASABE), visited the ATB. As part of his participation in the AgEng-Land.Technik 2022 conference in Berlin, he was provided with insight into the various research topics of the institute beforehand.

During a tour of the laboratories and facilities, he was particularly impressed by the technological developments for a bio-based circular economy.
In this context, Thomas Amon and his team presented their research on animal health and the environment in the ATB wind tunnel, where air streams were made visible by laser light cutting. The researchers also demonstrated how they can monitor the welfare of cows using a wide range of sensors.

Cornelia Weltzien and her team presented their research area agromechatronics and explained how robotics and digitalization can help to automate and increase precision in agriculture.

Oliver Schlüter and his colleagues presented alternative bioresources for feed and food and, with Joachim Venus, Keith Tinsey talked about alternative recycling options for organic residues in the ATB pilot plant for the production of biobased chemicals.

The production and use of sustainable biomass was also an important topic presented by Thomas Hoffmann during the discussion. In particular, the institute‘s own energy supply based on fast-growing poplars, which covers 50 percent of the energy needs of the ATB campus, generated great interest.