Lab visit as part of the PlAgri meeting: presentation of current ATB research in the field of quality and safety of food and feed (Photo: Rossi/ATB) 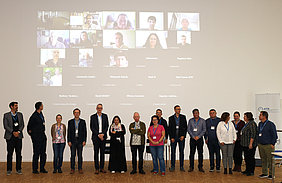 Plasma experts of the European network COST Action "Plasma Applications for Smart and Sustainable Agriculture - PlAgri" met at ATB on October 13 and 14 to discuss the current state of research and to align further strategic work objectives. The aim of the COST Action is to investigate the potential of low-temperature plasmas (cold plasmas) as an environmentally friendly alternative to conventional chemicals in agriculture.

Plasma is a gaseous state in which a significant proportion of molecules are dissociated and ionized. Can plasma applications help increase yields, enhance crop growth and robustness, reduce the need for fungicides, and also improve food safety? The scientific focus of this COST Action aims to investigate the potential of low-temperature plasmas (cold plasmas) as an environmentally friendly alternative for the treatment of seeds, crops, agricultural wastewater, growth media up to even manure, and to explore the processes of plasma treatment.

Working Group (WG5) is concerned with the scale-up of plasma applications to industrial scale. The main objective of this working group is to identify applications in the food supply chain where the use of plasma technology can be transferred to an industrial processing environment. The working group also aims to promote the development of plasma sources and technologies, taking into account aspects of legislation, energy consumption, cost efficiency, food safety and quality.

ATB scientist Dr. Oliver Schlüter has been researching plasma applications for improved food safety at ATB for years. He had invited the group to ATB in his role as a member of the Management Committee and Vice-Leader of Working Group 5.

In addition to the presentation and discussion of latest scientific results, another focus of the two-day meeting was on dissemination and communication towards stakeholders. The aim of COST Acion PlAgri is also to inform relevant stakeholders and policy makers about the potential of plasma applications in the field of food production and to increase awareness of the topic.

COST Action 91110 "Plasma Applications for Smart and Sustainable Agriculture - PlAgri" receives financial support from the European Union. A total of 33 countries are participating, including more than 25 European countries as well as associated partners, e.g. also from Japan.