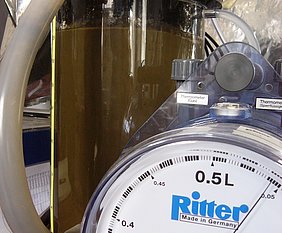 January 2015: For another two years the work of the junior research group "Biogas from Nitrogen-rich renewable raw materials and agricultural residues - Development and optimization of process engineering and microbiological solutions to prevent ammonia inhibitions" is funded by the German Ministry for Agriculture and Nutrition (BMEL) via its agency FNR.

Since 2012, one of four research groups funded nationwide by the Federal Ministry of Food and Agriculture (BMEL) is working at the ATB to find solutions for the production of biogas from nitrogen-rich substrates such as chicken manure, grass and legumes. During the fermentation these substrates tend to produce and accumulate ammonia, which inhibits the biogas process and reduces its efficiency and stability.

The aim of the researchers is to develop strategies for using these nitrogen-rich substrates, also in mono fermentations. Molecular techniques (such as pyrosequencing, FISH, real-time PCR) are applied to explore the microbiological communities at varying concentrations of ammonia. In addition to basic microbiological research the scientists focus on the optimization of existing processes such as the so-called stripping of ammonia with vacuum, air, biogas or steam or the precipitation of ammonium. Particular attention is paid to improving high performance two-phase methods (thermophilic / hyperthermophilic) which have been specifically developed for the fermentation of structure rich biomass at the ATB.

The extension of the funding period enables the research group a.o. to develop appropriate starter and supplementary cultures for the quick and complementary colonization of nitrogen-rich substrates.

Since 2012, the Federal Ministry of Food and Agriculture  (BMEL) promotes groups of young scientists who conduct research in the field of material or energetic utilization of renewable resources. The aim of the funding is - in addition to generation of research results - to anchor promising new areas of research structurally and sustainably at German universities and related institutions. In the first phase, the research groups have worked on the fundamentals and achieved initial results. In order to  further support the work and especially to prepare tranfer of results to practice BMEL is funding the groups for another two years.