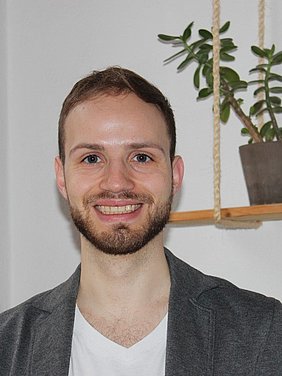 Fabian Frixen earned the Ludwig Ries Award for his outstanding thesis in the field of labour science in agriculture. His Bachelor thesis dealt with the "Use of passive exoskeletons in fruit and vegetable growing - a pilot study". The graduate of the Berlin University of Applied Sciences wrote it in cooperation with the Leibniz ATB. Congratulations!

"Particularly in fruit and vegetable growing, heavy physical work in awkward postures is still the order of the day," notes Dr Martina Jakob, who supervised the writing of the thesis on the part of Leibniz ATB. "Forced body postures can trigger acute or chronic back pain with restricted movement and degenerative changes in the spine."

In future, exoskeletons should provide a remedy or relief here. So far, these aids have hardly been used in agriculture. Field trials on an organic vegetable farm in Potsdam served on the one hand to investigate the practical use of passive exoskeletons and on the other hand to gain initial insights into the acceptance of these aids. In his investigations, Frixen used two methods of stress assessment to evaluate the severity of the activities. The results can be used to further develop exoskeletons in order to use them in the future as aids to relieve the strain of heavy physical work.

Frixen received the award endowed with 500 euros from the Association of German Engineers (Verein Deutscher Ingenieure - VDI) at the 23rd Colloquium on Occupational Science at Leibniz ATB. Congratulations!

The Ludwig-Wilhelm Ries Award was established in 1982 by the former Society for Work Science in Agriculture and the Ries family to commemorate the life's work of Prof Ludwig-Wilhelm Ries (1891-1974). It is awarded for outstanding achievements in the field of labour science in agriculture. Since 1995, the prize has been an honour of the VDI. In order to promote young scientists, it is awarded every two to five years by the Technical Committee for Work Science in Agriculture of the VDI Department Max Eyth Society for Agricultural Engineering.