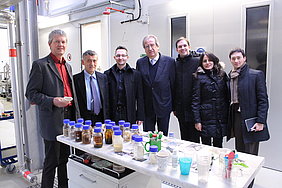 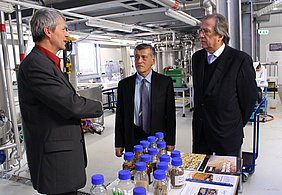 17th January 2014: Colombias Vice Minister for Agriculture, Hernán Román Calderón, visited the ATB. With him was the Colombian Ambassador in Germany, Juan Mayr Maldonado, and a small group of experts.

The visit aimed at evaluating the possibilities for strengthening the research cooperation between ATB and Colombian institutes. Since 2012 ATB is successfully engaged in a joint research project with Cenicafé, the largest Colombian coffee association. Research targets the potential utilization of residues from coffee industry for the biotechnological production of bioplastics.

In the near future, the visit of a mission of the authorities of the Ministry of Agricultural Innovation and the director of Corpoica, Juan Lucas Restrepo, is planned to formalize a cooperation agreement.