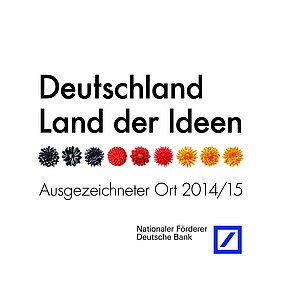 July 1, 2014: With its innovative approach "Optimized biochar from agricultural waste" ( „Optimierte Biokohle aus agrarischen Reststoffen“) ATB is among the 100 winners of the nationwide competition "Landmarks in the Land of Ideas" 2014. This year the competition is devoted to "Innovative country - Rethinking Rural Spaces".  The initiative "Germany - Land of Ideas" and the German Bank honour ideas and projects in Germany that provide solutions to the challenges rural regions are facing.

In several research projects (a.o. APECS, Biochar in Agriculture) ATB scientists address  the question of how biochar can be used as a sustainable fertilizer to improve harvests at low-yield sites. The now honored ATB idea is: If corn or straw produces biogas, digestate is left over. This can be processed into biochar which adds carbon to the soil. The chemical element is also firmly bound in the fertilizer and can not escape in the form of greenhouse gases into the atmosphere - a benefit for the climate.

Officially the ATB receives the award on September 3, 2014 in the context of a special biochar event at the institute. In addition to a panel discussion "Biochar Talk" presenting results from ongoing research projects on the topic guests are also invited to experience on-site research in ATB's biochar-lab.

Thus, the ATB has received the award for the second time. 2009, the institute had been awarded by the initiative "365 Landmarks in the Land of Ideas" for his idea to "NawaRo for plastic and Co".