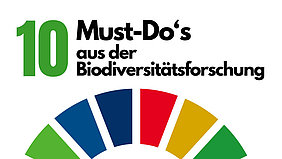 By 2030, 30 per cent of the planet's land and seas should be protected. All subsidies leading to the degradation of nature should be redirected. These are two of the recommendations from the 10 Must-Dos of the Leibniz Research Network Biodiversity. Together with over 30 national and international research institutions, the ATB is signing the demands for the global protection of biodiversity.

On 7 December 2022, the World Summit on Nature COP15 will start in Montreal with the aim of stopping the man-made extinction of species and strengthening biodiversity. To this end, the Leibniz Research Network Biodiversity pooled the knowledge of 18 of its member institutes and drew up 10 concrete recommendations for action for a political framework to preserve biodiversity globally.

With their "10 Must-Dos", the authors outline paths to biodiversity conservation that can be taken in the short term and in a targeted manner. As concrete measures, they advocate, among other things, more nature and biodiversity in urban areas, a reduction in light pollution, the protection and near-natural afforestation of forests, and linking agricultural subsidies to biodiversity-friendly production. All the measures listed would make an effective contribution to achieving the 17 Sustainable Development Goals (SDGs) from the United Nations' 2030 Agenda.

The researchers base their recommendations on the state of research as published in reports of the Intergovernmental Science-Policy Platform on Biodiversity and Ecosystem Services (IPBES), among others. The upcoming COP15, United Nations Conference on Biodiversity, which will be chaired by China and attended by representatives of governments of almost all countries worldwide, is expected to lead to a global framework agreement for the conservation of biodiversity. The outcome is open.

You can download the 10 must-dos from biodiversity research here: