Material and energetic use of biomass 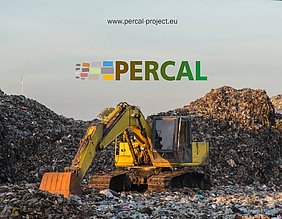 The PERCAL project has made significant steps in the valorisation of municipal solid waste (MSW). The technologies developed in the project have the potential to convert 30 to 50 percent of the 300 million tonnes of MSW generated in Europe every year - providing a significant contribution to the transition to a circular bioeconomy.

At the end of 2020, the project will end after three and a half years of intensive research collaboration.  It was extremely successful!

ATB’s contribution to PERCAL was to develop a process to produce lactic acid from the organic fraction of municipal solid waste.

Lactic acid is a versatile chemical, which finds applications in many fields such as pharmacy, food and chemical industry. The process utilizes the highly specialized bacteria Bacillus coagulans for the fermentation of the organic fraction of MSW hydrolysates. The microorganism is able to homo-fermentatively transform sugars into lactic acid, in other words without the generation of by-products. As a result, yields for the conversion of sugars are above 80 %.

ATB will continue its research activities in the BBI project CAFIPLA looking at the transformation of side and residual streams from organic waste pre-treatment into the carboxylic acid, lactic acid.

In the last stage of the PERCAL project, partner IMECAL (Spain) has studied the adaptation of a versatile biotechnological plant to obtain the three intermediates targeted by the PERCAL project bioethanol, lactic acid and succinic acid, to evaluate the scaling of the monitoring system previously developed at lab scale and to carry out a simulation task of the unified plant using the organic fraction of municipal solid waste as feedstock. The work done serves as a basis for the development of a demo or industrial biorefinery for the production of different added value bio-based chemicals.

The final project event took place virtually on 4 December 2020 and featured presentations from the project partners next to viewpoints from external stakeholders. The highly interesting discussion touched on several aspects of the problem of waste management in Europe and why technologies like those from PERCAL will be key in becoming more sustainable.

More information about the innovative pathways for converting MSW can be found in the guidance document Conversion Routes of the Organic Fraction of Municipal Solid Waste into High Added Value Products.
he document is available to download here.