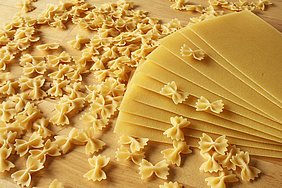 Almost 30% of the food produced globally is lost or wasted at some point along the food supply chain. The recent publication 'Upgrading pasta wastes through lactic acid fermentations' by the Leibniz Institute of Agricultural Engineering and Bioeconomy (ATB) and IDELUX, demonstrates the potential of pasta waste as the substrate to produce lactic acid.

Waste prevention and recycling are of particular interest to the food industry. In pasta production, some wastes occur, for example, when cleaning the equipment and when switching production to other pasta shapes. Thus, an estimated 23 grams of such pasta wastes per each kilogram of pasta produced cannot be sold. Together with IDELUX, the ATB looked for recycling possibilities. The potential is great. Extrapolated to the annual global pasta production, about 276 kilotonnes of pasta waste is waiting for its alternative utilisation.

"The homogeneity of pasta waste and its high starch content provide excellent conditions for both hydrolysis and fermentation and thus for the production of biochemicals such as lactic acid! That was our starting point," says Dr José Pablo López-Gómez, a researcher at the ATB. First, the researchers had to process the pasta waste by means of hydrolysis to release the sugar bound in the starch, because microorganisms are particularly good at metabolising simple sugars like glucose. After hydrolysis, these microorganisms, in the case of the study Bacillus coagulans A559, produce the biochemical lactic acid in bioreactors by means of fermentation. The researchers succeeded in optimizing the processes of hydrolysis and fermentation at the laboratory scale and then scaled it to pilot scale (72 litre bioreactor). The knowledge gained about process parameters makes it easier for industry to put the process into practice efficiently and cost-effectively.

"With our study, we have proven that pasta waste is a really good substrate for lactic acid production. At the same time, lactic acid was only a model product. Considering the excellent properties of the pasta waste for fermentations, other biochemical products with even higher value, should also be considered. Ultimately, the goal must be to establish the optimal upgrading routes for such type of wastes," says Dr José Pablo López-Gómez.