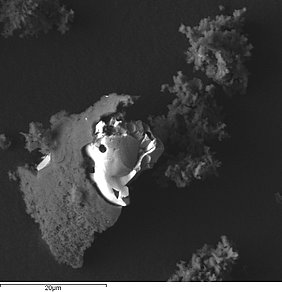 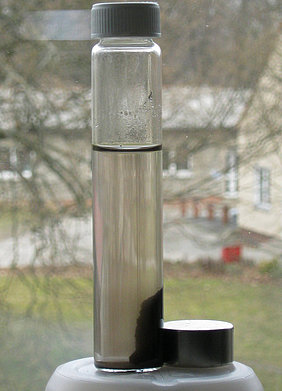 March 17, 2015: Scientists at Leibniz Institute for Agricultural Engineering in Potsdam and Humboldt University Berlin developed a simple process for direct synthesis of magnetic carbon composites and demonstrated their useful application in biogas production. The carbon particles also termed hydrochar were produced by hydrothermal carbonization (HTC) in a pressure cooker-like reactor. They have a moderate surface area and, as a novelty, a magnetic core. This unique combination opens the door for various applica-tions including fixation of microbial biomass or removal of problematic substances in bioprocesses, wastewaters or the environment. The results from a biogas application study were recently published in the high-ranked journal “Bioresource Technology”.

Anaerobic biological processes like biogas production are limited in their performance and usability due to slow microbial growth and inhibition effects by several chemical compounds such as ammonium. Until today, common techniques for the accumulation of microorganisms in a biogas reactor are usually based on their retention through sedimentation or installations inside the reactor, on which the microflora can settle and form biofilms. However, both require a low-solid fermentation liquor. In biogas reactors fed with solid feedstocks such as manure or maize silage the viscosity is often too high.

In a new approach to improve efficiency of the biogas process, scientists of the Leibniz Institute for Agricultural Engineering in Potsdam (ATB) and Humboldt University Berlin use biochar – more precisely: magnetic carbon composites.

Biochar is a carbon and surface-rich material. Like charcoal, biochar is obtained by thermo-chemical conversion of biomass, which includes the use of digestate from biogas plants. Bio-char can be produced by different techniques. A process with a particular flexibility is the hydrothermal carbonization (HTC). HTC is performed in presence of water and the biomass is via various intermediate steps converted into carbon products with distinct properties. Because of their high biological stability and high sorption capacity for water and nutrients, bio-chars are considered as an additive for soil amendment and carbon sequestration. In addition, various other applications of biochar e.g., wastewater cleaning or catalysis of biological and chemical processes are under investigation.

In their article, recently published in the journal „Bioresource Technology“, the researchers report about the hydrothermal production of magnetic carbon composites and their successful colonization by biogas microorganisms in laboratory tests.

“Our results clearly indicate that HTC is an adequate technique for producing stable magnetic carbon composites which, for example, qualify as support media for functional microorganisms. These composites can be retained in the biogas process by magnetic forces and thus lead to a higher concentration of active microorganisms in the biogas reactor”, underlines project leader Dr. Jan Mumme. “Anaerobic microorganisms are more tolerant of environmental threats and achieve higher synergistic performance when in form of a biofilm instead of free-living cells”, adds Patrice Ramm, who works on magnetic retention in anaerobic digestion in scope of his PhD thesis.

Main advantages of new carbon-based method are the simple production of magnetic composites at relatively low temperatures, the use of abundantly available organic materials (e.g. waste biomass) and the high flexibility of the composites in terms of their functionality and morphology.

The new magnetic composites were produced from microcrystalline cellulose and the magnetic compound “ferrite” at 250°C in a HTC pressure reactor. Microscopic images revealed an amorphous carbon layer growing on the 30-80 µm ferrite particles. The ferrite’s magnetic properties sustained the HTC process unchanged. As a result, composite particles with carbon structures on a magnetic core were obtained. With 0.88 m2/g, the surface area of the new material was similar to the raw cellulose but considerably lower than non-magnetic cellulose-derived hydrochar (21.2 m2/g).

In the next step, the composites were tested over 158 days in laboratory-scale fermentation trials for their impact on biogas production (beet silage served as feedstock). For comparison purposes, a non-magnetic hydrochar, a zeolite as a long-established biogas additive, and a control without any additive were investigated parallel to the magnetic composite. At the beginning, both carbon products showed inhibitory effects on the biogas process, which however, declined rapidly. In the end, the magnetic composites achieved a methane yield of 93 L per kg of beet silage, which was higher but not significantly higher than all other treatments. Microscopic analyses confirmed microbial inhabitation of the magnetic particles as desired.

Dr. Rainer Tölle from Humboldt University Berlin, long-term experienced in detection of magnetic properties in various materials from the environment and technical processes, has developed a new analyzer for determination of the magnetic susceptibility. This device was used in the present study to assess magnetic properties of the composites. “The magnetic susceptibility is a material property, which allows fast and nondestructive measuring. The parameter describes the attractive force between the sample and a magnet. Under certain conditions, it can also be used as an indicator for the content of heavy metals in the sample”, describes the scientist.

Since 2009, the ATB conducts research in the areas of biochar, since 2005 together with HU Berlin on the use of magnetic particles in biogas production. Besides 30 scientific publications also a range of patents were developed among others on the production of magnetic carbon composites and their application in biogas as well as on the integration of biogas and biochar into an advanced concept for organic waste treatment with improved economic performance and climate impact.

The project group „APECS - Anaerobic Pathways to Renewable Energies and Carbon Sinks“ was supported from 2009 to 2014 by grants from the German Federal Ministry of Research and Education under the funding Scheme “Bioenergy 2021”. Currently, project leader Dr. Jan Mumme works as visiting researcher at the UK Biochar Research Center at the University of Edinburgh, GB. Dr. Toufiqur Reza, former researcher of the APECS group, now works at the University of Nevada in Reno, USA.

Pictures related to this press information can be found here

The Leibniz Institute for Agricultural Engineering Potsdam-Bornim is a European center of agricultural engineering research at the nexus between biological and technical systems. Our research targets a knowledge-based bioeconomy. We are developing highly innovative and efficient technologies for the use of natural resources in agricultural production systems - from basic research to application.

The Biosystem Engineering Division at the Faculty of Life Sciences of Humboldt-Universität zu Berlin is active in education and research at the nexus between engineering sciences and biobased production systems. The team develops engineering solutions for a sustainable production of agricultural products and technologies for a safe and clean environment.