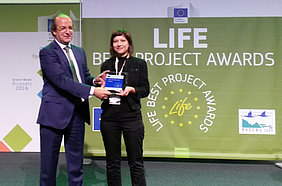 May 31, 2016: BREAD4PLA uses waste from bakery industry for the production of biodegradable packages. It was recognised by the European Commission as one of the best 2015 Life Projects. On behalf of the consortium, Rosa Matilde González Leyba from the coordinating AIMPLAS, Valencia, Spain, received the price in Brussels.

In BREAD4PLA, a new fully biodegradable packaging for bakery products from the wastes generated by this industry has been successfully developed.

Researchers from ATB, CETECE  the Cereals Technology Centre (Spain),the Biocomposites Centre from Bangor University (United Kingdom), and AIMPLAS (Spain), with the collaboration of Panrico and Grupo Siro, have achieved to obtain polylactic acid from fermenting crusts and sliced bread and sponge cakes wastes. The biotechnological production of polylactic acid (PLA) from these components was developed in the ATB pilot plant. PLA is the basis chemical for the further production of a biobased film with which bags and trays for different products of the bakery sector can be manufactured.

The new packages have oxygen and water vapour barrier properties that make them useful especially when packing pasta and sweets and achieve a twelve-month shelf life, equal to the traditional packages of this kind of products, such as polypropylene (PP) packages. Another advantage is that they reduce the rancidity of packaged products in relation to traditional packages. Furthermore, from the environmental point of view, the new packages are biodegradable and compostable.

The award ceremony for the best 2015 Life projects took place in the context of "Green Week" (30 May to 3 June) in the Egg Conference Centre in Brussels. The Green Week is a series of conferences organised by the Commission (DG Environment). This year's event focused on "Investing for a greener future" and on the central question of how to achieve smart, sustainable and inclusive growth in Europe.

BREAD4PLA (Demonstration plan project to produce poly-lactic acid (PLA) biopolymer from waste products of bakery industry) was funded by the European Commission within the framework of its LIFE + programme (Grant Agreement: LIFE10 ENV/ES/000479)