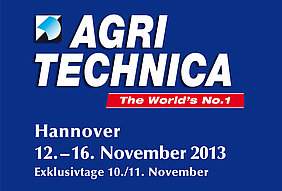 At the world's largest agricultural machinery exhibition ATB presents a new device for efficient harvesting of agro wood as well as a radio-based intelligent system for on-demand irrigation control. Another focus is on the potential of biochar from biogas digestate as soil additive.

ATB together with its industry partner Jenz, Petershagen, developed a new machine for harvesting short rotation coppices in rows. The device is characterized by simple structure and easy operation. It is attached in front of a tractor, separates and shreds the trees in a vertical position and throws the chips on a means of transport. It can be operated with tractors with an engine power of 75 kW and is suitable for the use on small-size acreage.

Intelligent radio-based system for on-demand irrigation control
An automated "intelligent" and radio-based irrigation system was developed by ATB together with Technical University of Berlin and in cooperation with Logic Way GmbH, Virtenio GmbH and MMM Mosler Tech Support. The system allows demand-oriented, resource-efficient irrigation, and can be used flexibly in a wide range of agricultural and horticultural technical uses.

Biochar as a soil additive produced from biogas digestate
Biochar is expected to increase carbon content in the soil. Because of its very large surface area the nutrient and water holding capacity of the soil can be increased and the microbiological activity can be improved. Moreover, carbon from the atmosphere bound in plants can be permanently fixed in the form of biochar in the soil (C sequestration).
Biochar can be technically produced. The carbonization of the biomass by means of pyrolysis or hydrothermal carbonization (HTC) transfers organic substances in a stable form. ATB uses residues  from agricultural production, such as digstate from biogas production. Whether and in what form technically produced biochar is to add value to low-nutrient soils is currently being studied at the ATB. Results will be presented.